Let's Make This the Year of Understanding 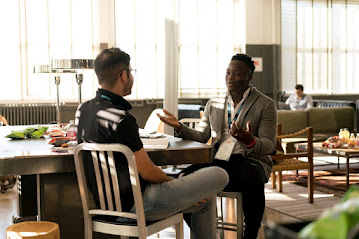 Photo by nappy from Pexels

“Wage peace with your listening.”

from the poem 'Wage Peace' by Judyth Hill

You've likely heard the traditional story about the blind men and the elephant. In this version of the tale, no one can see the elephant because it's in a dark room:

Different points of view produce different opinions. If someone had brought a candle, they would have all felt like fools."

I certainly don't claim to have all the answers, but I have seen more parts of the 'elephant' than many people:

All of these factors have given me a lot of insights into the ways different groups of Americans perceive each other, as well as how our perception of ourselves differs from how we're perceived in many other parts of the world.

Far too often, we start with an assumption about someone, and then look for evidence to support it.

In a traditional story from China, a man suspects that his ax was taken by his neighbor's son:

"He looked just like someone who would steal an ax. [...] In his actions, movement, and his bearing, it was plain that he had stolen the ax."

Then the man finds his missing ax.

"When he saw the neighbor's son again, he found that his actions, movement, and bearing did not seem at all like someone who would steal an ax."

Deng Ming-Dao, The Wisdom of the Tao: Ancient Stories that Delight, Inform, and Inspire, p. 180

It's amazing how much people tend to demonize their neighbors (in terms of members of another religious group or ethnicity) rather than making any attempt to consider what could really be going on.

The only times I've gotten negative comments on the Mindful Teachers blog or social media have been visceral reactions against posts about Christian mindfulness.  I was stunned by the snarkiness of anti-Christian comments and anti-mindfulness comments. It wasn't mindful, it wasn't Christian, and it certainly wasn't kind or compassionate.

As my colleague Dr. Irene Kraegel puts it,

"We are too often reacting to caricatures of one another rather than taking the time to actually know one another’s perspectives." (See 'Can Evangelical Christians Practice Mindfulness?')

Listening to Each Other

Rightly or wrongly, most people put on different filters when looking at 'us' or looking at 'them.' Rightly or leftly, this is increasingly true when it comes to political affiliation. But again, it doesn't have to be that way. We get along very well with our neighbors, even though we don't see eye to eye on everything. One of them told my husband, 'You're a good neighbor, even though you're not a [member of my political party].')

Conflict resolution expert Donna Hicks believes that treating each other with dignity is the key to deescalating tension.

"The simple act of saying to a person, 'Please say more about your experience,' instead of rushing to 'you're wrong,' completely shifts the dynamic of a conversation. The person, instead of being put on the defensive, can now feel seen and heard. Nothing is lost by asking for more information. Whatever the response, it will enrich your understanding, and the person will feel more understood because you asked, because you showed that his or her perspective matters to you."

You might be interested in one of these programs that encourage thoughtful discussions sharing different points of view:

In an opinion piece in the Wall Street Journal, Paula Marantz Cohen explains how The Seminar Course Can Save Civility:

"If free speech is now seen by the left as an excuse for hateful and hurtful speech, safe spaces are decried by the right as excuses to shut down disagreement and encourage liberal coddling. The seminar reconciles these warring values. When well-run, it is both free and safe. In this setting, students feel empowered to speak their minds [...] as well as more willing to change their minds."

Here at Mindful Teachers, there's a series of posts by Ira Rabois, author of Compassionate Critical Thinking about encouraging thoughtful discussion and connection in academic classes:

Conclusion: Setting an Intention for the Year

Like many people, I've decided to let go of new year's resolutions and instead choose a word that represents my intention for the year.
Would you like to join us?
2020 was a year with too much tension and hostility. Let's make 2021 the year of Understanding.

The Power of Intention Setting for a Mindful New School Year

Resources for Teachers on Equality, Diversity, and Civil Rights

Songs About Identity, Diversity, and Empathy