Tales of Generosity: Lessons on Gratitude and Compassion 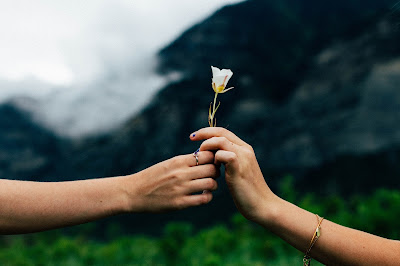 
For these stories about giving and receiving, I've drawn from a variety of sources, including a Hasidic tale, a Sufi parable, and a couple of popular passages from the Gospels.

I invite you to consider perspectives from different traditions, and share them with your students if they seem appropriate for your particular context.

Photo by Evan Kirby on Unsplash

The following story is from a popular collection of Nasrudin tales compiled by Idries Shah:

"A kinsman came to see Nasrudin from the country, and brought a duck. Nasrudin was grateful, had the bird cooked and shared it with his guest.

Presently another visitor arrived. He was a friend, as he said, ‘of the man who gave you the duck’...

This happened several times. Nasrudin’s home had become like a restaurant for out-of-town visitors...

Nasrudin asked his wife to bring the soup... it seemed to be nothing more than warm water.

'What sort of soup is this?'

The Exploits of the Incomparable Mulla Nasrudin

This is a traditional story in some Buddhist lineages.   (The following is excerpted from a much longer and more graphic version at MonkeyTree.org.)


"One day, three princes rode out to hunt... Suddenly, not far from them, the princes spotted seven tiger cubs frisking in the grass around their mother.

The tigress was thin and gaunt. She had not eaten for so long that her milk had dried up. The mother tiger stared hungrily at her cubs...

This is a Hasidic folktale I've paraphrased  from a version I found at LearningtoGive.org.

Two rabbis were collecting donations. When they approached a very wealthy man, he only gave them half a penny. One of the rabbis was offended by this paltry offering, but the other thanked the man and blessed him.

A little while later the man approached them with an apology and a silver coin. Again, the first rabbi thought this was a very small donation from such a wealthy person, but the second rabbi thanked him and said, "You are a good a generous man."

The rabbis went on their way, and a little while later, the rich man ran up to them, heaving a heavy sack. He apologized again to the rabbis for not giving them more money sooner, and handed them the sack, which was full of silver coins.

The first rabbi was amazed, and the second rabbi explained what happened:

The rich man had been quite generous with donations in the past, but one day a beggar approached him when he only had half a penny in his pocket. The beggar was so rude in refusing this small sum that the rich man was offended and decided to only give away half-pennies to anyone who asked him for money.

The rich man's negative attitude was reinforced by the scorn with which recipients rejected his half-penny offerings. But when the rabbis thanked him for his gift, the rich man felt appreciated, and he remembered his better self and returned to his previous generosity.


Two Stories from the Gospels

For those of you who may not be familiar with the Christian Bible, the Gospels are the first four books of the New Testament; they recount the life and teachings of Jesus. The following passages are commonly used in sermons and Sunday school lessons, but they also have universal messages that are relevant to non-Christians.

"Jesus looked up and saw the rich putting their gifts into the offering box, and he saw a poor widow put in two small copper coins. And he said, 'Truly, I tell you, this poor widow has put in more than all of them. For they all contributed out of their abundance, but she out of her poverty put in all she had to live on.'"

This is a popular expression, but many people don't realize that at the time the Gospels were written, there was a lot of tension between Samaritans and the people of Judea. So the situation would be somewhat similar to the more recent tensions between Sunni and Shia Muslims or Protestant and Catholic Christians.

But a Samaritan... took pity on him. He went to him and bandaged his wounds... Then he put the man on his own donkey, brought him to an inn and took care of him. The next day he... gave [money] to the innkeeper.

‘Look after him,’ he said, ‘and when I return, I will reimburse you for any extra expense you may have.’

The following passage is taken from the novel The Temptation of Forgiveness by acclaimed mystery writer Donna Leon. The main character is a thoughtful and humane police commissario named Guido Brunetti.


"His family, it seemed to him in retrospect, had combined poverty with generosity... He remembered a succession of men... who had often eaten with them and recalled that his own clothing, after he'd worn it for two or three years, often disappeared from his wardrobe after a visit from a cousin of his mother's... with six children...

Brunetti's had been a family that had nothing but could always find something amidst that nothing to give to someone who had more nothing."

And here's a quote from Warren Buffett, who's given billions of dollars to charity:

"I could live very comfortably on less than 1% of that which I possess, all the rest is surplus. I have been lucky. I was born at the right time, in the right country, and I have been disproportionately rewarded for the work I have done. It's the teachers, policemen and firemen who are our true heroes, and those who give up an evening out, or a dinner at a restaurant, in order to be able to help others. I have given away nothing that I need, so please don't make of me a hero."

from Giving: How Each of Us Can Change the World, quoted in Doing Good: Inspiring Activities and Ideas for Young People to Make the World a Better Place

A Gift of Grapes

Macarius was one of the 'Desert Fathers,' a group of Christian hermits who lived in the Egyptian desert in the fourth century C.E./A.D.


"Once a certain brother brought a bunch of grapes to the holy Macarius, who for love's sake thought not on his own things but on the things of others. [So he] carried it to another brother, who seemed more feeble.

And the sick man gave thanks to God for the kindness of his brother, but he too thinking more of his neighbor than himself, brought it to another, and he again to another.

So that same bunch of grapes was carried round all the cells scattered... far over the desert, and no one knowing who first had sent it, it was brought at last to the first giver."

quoted in The Meditative Mind by Daniel Goleman

[update 8/14/18: I just finished reading Nonviolent Communication by Marshall Rosenberg, and I was quite moved by his account of his grandmother's actions during and after the Great Depression. So here are two more, incredible but true, Tales of Generosity.]


"Grandmother brought a tailor and his wife and two children to live with her for three years after he lost his house and business. I could never figure out where grandmother had found space for the tailor's family when she was raising nine children herself in a modest-sized house!"


Another time, a ragged-looking man came to the back door asking for food. He had scraggly hair and was wearing a large cross he'd made out of sticks and rope.

"My [Jewish] grandmother invited him into her kitchen, and while he was eating she asked his name...

([Her] English wasn't too good... She introduced the stranger [to her family] as Mr. Thelord.)...

'Where are you going to stay tonight? It's cold.'

[She could have] judged him as crazy and gotten rid of him. [Instead,] she thought in terms of what people feel and what they need. If they're hungry, feed them. If they're without a roof over their head, give them a place to sleep."


[Update 9/10/18: A member of the Mindful Teachers community just told me about a couple in her city who helped a homeless woman in a very similar way. Unfortunately, the situation did not turn out well: the woman attacked them (possibly while intoxicated or under the influence of drugs), and they are now in the hospital. Our colleague asked me to share this as a cautionary tale, but also to mention that she knows many other homeless individuals who are lovely people.]

Questions for Reflection and Discussion

Poems, Quotes, and Proverbs about Mindfulness and Compassion

More Than Saying Thank You: Activities That Encourage Awe for the Ordinary

Resources for Practicing and Teaching Gratitude