Buddhist Perspectives on Mindfulness and Compassion 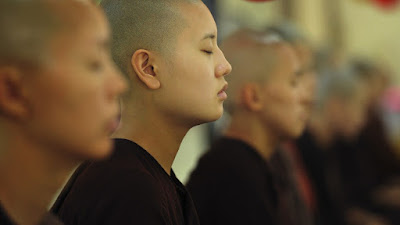 image of Theravada Buddhist nuns
by truthseeker08 from Pixabay

“A participant asked me, ‘Are you going to be teaching us meditation in a spiritual way?’ I told her that I’d prefer not to respond, but would rather welcome her to answer that upon completion of the series [of classes].

When we arrived at the last class, I circled back to her question. ‘Well, you didn’t teach meditation like it was a religious thing,’ she reflected. ‘But I found it deeply spiritual. I connected to my soul in a whole new way.’”

Harrison Blum, “Dare We Leave Our Buddhist Centers?” in Still, in the City: Creating Peace of Mind in the Midst of Urban Chaos, p. 25

With the ever-increasing popularity of mindfulness, there continues to be a lot of misunderstanding about Buddhism and how it connects to secular mindfulness teaching.

As I mentioned last week in a post on Christian Mindfulness, Yoga, and Contemplative Practices, I have no agenda in terms of trying to convince anybody to practice a particular type of meditation or prayer.

My only goal with this post is to help spread accurate information about the range of perspectives among Buddhists and how they connect with the popular forms of secular mindfulness teaching.

First, a Brief Introduction to Buddhism


Many Westerners think of the Dalai Lama as the leader of all Buddhists. It's more accurate to think of him as similar to the Pope, who is the leader of Catholics, but not Protestants or Orthodox Christians, and is also the sovereign of Vatican City.

The two most popular types of Buddhism in the West are Tibetan and Zen, which are quite different from each other. We could compare it to the level of difference between, say, Catholics and Quakers, without implying any similarity to those particular Christian denominations.

Here's a good place to start for a basic overview of Buddhist history, branches, and practices:

Here's a useful article that explains the history and practices of Zen Buddhism, and how it spread to the West:

And here's an article that explains about Tibetan Buddhism:

These are some terms that are commonly used in the context of mindfulness meditation.


Buddha: someone who is fully awakened; the historical Buddha who lived and taught 2500 years ago

Boddhisattva: someone who has vowed to help all sentient beings (humans and other living creatures)


There is a much more extensive glossary of Buddhist terms at Dharma.org (Insight Meditation Society).


What is "Buddhist Mindfulness?"


In a interview on Mindfulness, Compassion, and Buddhism I asked mindfulness coach Sean Fargo,

“As a former monk, what’s your perspective on the ongoing debate (especially in public schools) about whether secular mindfulness teaching is really Buddhism in disguise?”

But here’s the thing: mindfulness is not in and of itself “Buddhism”. Buddhism is based on The Four Noble Truths, of which mindfulness is a part, along with thousands of other teachings on karma, rebirth, wise intention, livelihood, concentration, etc.”


When I asked Dr. Seonaigh MacPherson about Buddhist vs. Secular Mindfulness Training, she explained,

“Buddhists train vigorously in personal ethics [which is] not part of the usual approach to training in secular mindfulness.... Also, Buddhism doesn't end with mindfulness; it just begins there. So, while all the secular research and programs tend to focus on mindfulness, in Buddhism mindfulness is understood as part of the Seven Factors of Enlightenment...

[which] begin with mindfulness, but only when catalyzed or focused with investigation and energy (which together could be understood as "interest" perhaps), does the full import of mindfulness for teaching and learning begin to be appreciated and experienced.

Likewise, the seventh and final factor, equanimity, teaches us a lot about the implications of how and why we practice mindfulness. We are looking for that equal interest or curiosity between experiences we might ignore, crave, or reject (feel averse to).”

It may not even be fair to ask about “Buddhist mindfulness”  as one unified whole. In an article on “Mindfulness in Different Buddhist Traditions,”  Bhikkhu Anālayo says:

“The theoretical construct of mindfulness and the practices informed by this notion have gone through considerable development over two and a half thousand years of Buddhist thought, making it impossible to speak of “Buddhist mindfulness” as if this were a monolithic concept.

Each construct of mindfulness has its own intrinsic value, informed by the historical context out of which it arose.”

Here's a selection of leading authors whose teachings are accessible to both Buddhists and non-Buddhists:

I'd like to end with the words of Jade Bryan, whom I interviewed last year about How Mindfulness Can Help Us Wake Up to Oppression and Suffering. Jade is active in the LGBTQ2IA+ community and is the author and illustrator of Dragon Girl, a children's book based on the Lotus Sutra and traditional Buddhist cave paintings.

With political movements like #metoo and Black Lives Matter, people in power are finally seeing how widespread our society’s trauma really is. All of us have a role in this. This suffering has always been there, but we are only just starting to wake up to it, because society is built around making it invisible.

Every day, we’re seeing how suffering is rooted in intersecting oppressions: sexuality, class, race, disability, mental health, gender, and other social divisions that dehumanize people. We’re seeing how people’s dignity and respect are beaten down. But we’re also witnessing how people resist and reclaim their humanity, no matter how much suffering they’re living in, which is just so profound...

We can’t reduce suffering (of ourselves or others) unless we look at everything and everybody as interconnected. Collective suffering is our own suffering—-but so is collective healing...

Voices which have been historically silenced are finally being heard, and collective spiritual healing is key to these transformations. I believe that Buddhist principles are powerful in helping us to uproot social ills and cultivate seeds for a more enlightened world. That’s what Buddha was all about!”