Mindful Speech: How Do You Handle Anger? 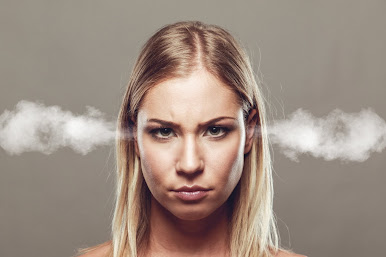 I have no idea what upset me, but I clearly recall being furious about something when I was five or six years old, and an adult saying:

“When you're angry, you should take a breath and count to ten.”

That made absolutely no sense to me at the time. I remember blowing out a big puff of air and thinking:

I can see now that I misunderstood not only the solution but also the problem.

The problem isn't the feeling of anger or frustration but the potential hurtfulness of our reactions (to ourselves as well as to others). The most common reactions to anger are understandable but unhelpful: we tend to be overly aggressive, passive-aggressive, or overly passive.


Two Problems with Aggression
Have you ever been really angry at someone and then felt embarrassed when you realized you'd misread the situation? Or been in the opposite position, where someone scolded you for something you didn't do?  (Like the time a colleague chewed me out because “I know what you were really thinking.” He actually wasn't a very good mind reader.)

At other times, our feeling of anger may be justified, but an overly strong reaction can do a lot of damage.

In a guest post at the Center for Adolescent Studies blog, I tell the story of a teacher who completely lost it at a couple of kids who'd been acting up in class.

“He grabbed a textbook and slammed it on his desk as hard as he could.
WHAM!
Smash!
Oops.
... As soon as he realized what he’d done, the teacher yelled, ‘Now look what you made me do!’"

But of course the kids didn't make him crush his own reading glasses. That happened because he lost control of his temper, which also made him lose the respect of the class.

The Problem with Passive-Aggressive ‘Niceness’

I was surprised when a friend told me that he didn’t mind, not at all, it was totally fine that his roommate’s girlfriend had basically moved in with them.

But then, just a few minutes later, he told me how much he enjoyed leaving open boxes of candy on the kitchen counter so he could sabotage her diet.

It would have been better for everyone if my friend stopped being so ‘nice’ and talked to his roommate about their living arrangements.

As Thérèse Jacobs puts it:

“Sometimes being ‘nice’ isn’t very nice. Our feelings of anger or hurt leak anyway. Maybe our jokes have an edge, we withdraw from the relationship, or we speak ill of the other person behind his or her back… we can do harm… [by not] being more emotionally honest.”

Mindfulness and the Twelve Steps

The Problem with Passivity (Denial or Inaction)

“Anger can be an important emotion to wake us up to the fact that compassionate action is needed.”

While we certainly don't want to be aggressive or passive-aggressive, passivity also has its price. There isn’t just a cost to ourselves in stress. There’s a societal cost if we put up with unfairness or bullying because we think anger isn’t ‘nice’ or we're too intimidated to stand up for ourselves and others.

Rev. Fred Lehr describes a common phenomenon among clergy that I've also seen among many teachers.

“Often anger is not readily admitted even to oneself. It can be experienced through physical symptoms like muscle tension, high blood pressure, stomach aches or excessive sleeping... excessive dieting... [or] substance abuse.”

And Cheryl Richardson describes a common phenomenon among women that I've experienced myself in many situations:

“You suddenly freeze up. You stand there like a statue completely disabled, unable to say a word... stunned into silence, and end up beating [yourself] up for not saying anything.”

Rather than lashing out, sulking or giving in, we need to calmly choose an appropriate response.
There are a few different acronyms for handling strong emotions, like STOP or PAUSE. My favorite is TAP: Take a breath. Acknowledge. Proceed,” which I learned from my colleague Dr. Sam Himelstein of the Center for Adolescent Studies.
When I'm feeling angry at someone, I do my best to combine Sam's TAP practice with my own variation on lovingkindness meditation.

Conclusion (and a Confession)

In Living Beautifully with Uncertainty and Change, Pema Chodron describes how she started crying while reading a classic Buddhist text “because I was so moved to be loving and compassionate.” But then, “Someone burst into the room, and I blew up at her for interrupting me.”

I had a similarly ironic experience while writing this post: I got an email that made me quite angry, and I had a very hard time following my own advice!

Here's what happened. I stared at the message for a few seconds, then yelled:

“Gadzooks! I feel quite incredulous!”

Then I complained to my husband about how unfair it was that I'd been falsely accused.

“And the worst part is there's nothing I can do about it.”

He agreed that the accusation was unfounded, but disagreed that I was powerless.

“Why don't you call them and sort it out?”

Um, because I'm much more comfortable cursing them behind their backs and then having as little to do with them as possible for the foreseeable future?

I can't say I handled it as equanimously as I would have liked: I raised my voice during the first call and spent most of the second call in tears. But after those two phone calls the situation was resolved.

And it felt much more satisfying to politely but firmly defend myself than it would have to keep ruminating on the situation and become crabby and passive-aggressive.

I was right as a child that counting to ten doesn't make the feeling of anger disappear. What I didn't understand is that the purpose of taking a breath, or several breaths, is to create a gap between trigger and reaction. The point isn't to ignore or suppress the feeling, but to pause long enough that we can calmly choose a wise response.

So before I picked up the phone, I paused for a few seconds to breathe and slowly count to ten. And yes, it really did help.

Photo by kinkate from Pexels

Next Time, I’ll Do Better: Recognizing and Learning from Mistakes

Step Back, Then Tackle Your Frustration: Tips for Mindful (but Busy!) Teachers

Wise Elder Visualization: A Practice for Parents and Teachers