by Catharine Hannay, adapted from Being You: A Girl's Guide to Mindfulness

It really bothered me when I saw an ad for a mindfulness workshop that was “guaranteed to make you feel happier and more relaxed.” Mindfulness is about awareness. It's not about being in a particular mood all the time.

In fact, something unexpected happened a few weeks after I started practicing mindfulness. I’d been feeling like, “This is great! Everybody should do this! I feel so much better!” Until suddenly it didn’t feel so good anymore.

When I started paying more attention to my thoughts, I realized how much time I spent ruminating (having the same thoughts over and over). It felt like I was constantly stressed out about what was happening, anxious about what was going to happen, or worrying about something that already happened.

When I started paying more attention to my feelings, I realized there were a lot of emotions I was trying to avoid, like anger, frustration, sadness, and embarrassment.

And when I started paying more attention to my interactions with other people, I realized that I wasn’t always using mindful speech. I had a tendency start talking before thinking through what I really wanted to say. I frequently embarrassed myself by doing that. Other times, I really hurt someone’s feelings.

That was a challenging time in my life, but I’m glad I went through it. Now I understand how to respond more thoughtfully rather than reacting in a way that might be hurtful to myself or other people.


You Are Not Your Thoughts


Because we can’t control things that have already happened, or that haven’t happened yet (and may never happen), we can feel a lot better if we shift our attention to the present moment. Practicing mindfulness meditation can also help you realize that “you” are not your thoughts, by separating what you’re thinking or feeling from who you are as a person. Do you sometimes feel angry or have unkind thoughts? That doesn’t mean you’re an unkind, angry person. It means you’re a person who sometimes has unkind thoughts and angry feelings.

Meditation doesn’t mean trying to completely clear your mind so you don’t have any thoughts. You can’t stop your brain from thinking. That’s its job. Meditation is more about becoming aware of our thoughts so we can see more clearly what’s really going on, like cleaning a window or the windshield on a car.


What did you notice about your thoughts? If you’re like me, you probably were surprised by how many thoughts are going through your head one after another. Don't try to get rid of your thoughts or judge them as good or bad. Just acknowledge them and let them go.

You can try labeling your thoughts and feelings as a type of meditation or as an informal practice throughout the day. I find it helpful to do that when I'm feeling anxious.

For example, when I was working on a big project, I kept having thoughts like “Oh, no. I’m gonna mess this up!” I was so focused on my negative thoughts that it was hard to focus on the project.

Because I couldn’t concentrate, I felt even more anxious because I was afraid that I wouldn’t finish on time. That made it even harder to concentrate, which made me even more anxious. I was caught in a vicious circle, with my mind going around endlessly in the same negative pattern.
What finally helped was simply reminding myself “I’m feeling anxious.” Then I started thinking about why I was feeling anxious: I wanted to do a good job.

After that, whenever I caught myself feeling anxious about the project, I’d remind myself, “I want to do a good job.” That motivated me to get back to work, and once I was actually working on the project, I felt a lot better. That made me feel less anxious, which made it easier to concentrate. The vicious circle of my thoughts turned into a virtuous circle.

When we're feeling angry or frustrated, the problem isn't the feeling itself but the potential hurtfulness of our reactions.

While I was writing Being You: A Girl's Guide to Mindfulness, I asked teen girls about how they benefitted from practicing mindfulness. Several of them mentioned that it helped in their relationships with friends and family. For example,


Linneth said: “Mindfulness has helped me a lot to deal with stressful situations and to think before speaking whenever I'm mad. It helped me to stop from saying things I would later regret.”

Mengyue said: “[Mindfulness] helps me when I'm doing homework but my sister disturbs me. At that time, I always take a deep breath and tell myself, “It's OK,” “don't be angry,” “be kind,” and so on.”

and Camila said: “When I got angry or felt stress, I used to scream at people, but when I started to practice mindfulness, I started to have more control in these situations. So, instead of screaming, I try to find a solution.”


There are a lot of acronyms for taking a mindful pause, like STOP or PEACE. My favorite is TAP, which I learned from my colleague Dr. Sam Himelstein, the director of the Center for Adolescent Studies.


When you Take a Breath, you pause for a moment before reacting. This can help you avoid doing or saying something you might regret.

When you Acknowledge, you think about what’s going on inside you and around you. For example, if you’re having an argument, you might recognize that you’re feeling angry and frustrated. You might also realize that the other person is feeling the same way.

Now you’re ready to Proceed, taking whatever action seems most appropriate. Sometimes you might decide not to act. There are times when not doing or saying anything can be the most helpful action of all.

We All Make Mistakes


One night at dinner, I told my husband, “I'm sorry. I didn't hear what you just said. I was thinking about this week's guest post.”

I felt pretty embarrassed when I told him, “Mindful listening.”

Yes, I run a website about teaching mindfulness, and my mind still likes to wander whenever it gets the chance. This kind of thing happens so often that I joke about how I should start a Mindless Moments podcast. Sometimes you've just gotta laugh at yourself, right?

On the other hand, sometimes we all do things that aren't a laughing matter. Maybe we hurt someone's feelings or we make a big mistake.

It's uncomfortable to feel guilty or embarrassed about something we've done. Instead of trying to push away these negative feelings, we can use them as motivation to avoid making the same kind of mistake again.


Practice 3: Next Time, I'll Do Better: Recognizing and Learning from Mistakes (This is an activity I originally posted here at Mindful Teachers and also included in the book.)


Realizing you’ve made a mistake can feel awkward or maybe even painful. As you’re becoming more self-aware, it’s important to be very gentle with yourself. Don’t beat yourself up about making mistakes. We all say and do things we regret. It’s part of being human. 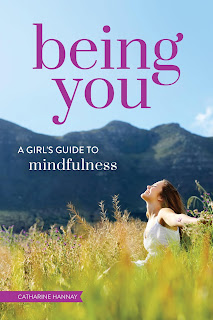 Adapted from Being You: A Girl's Guide to Mindfulness, by Catharine Hannay. © Prufrock Press, 2019. Used with permission. www.prufrock.com