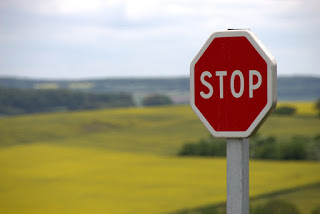 It all started with Rainbow Walk.  That's my favorite way to practice mindfulness of my surroundings, and it's been consistently in the top ten posts for the past couple of years.  So I thought it would be fun to try a "rainbow drive," looking at different colors like a red barn, the blue sky, and so on.

Let's just say that was not the most brilliant idea I've ever come up with.  I tried Rainbow Drive a grand total of one time, and it went like this:

"Ooh,  look at the pretty flowers."

"Oops, I just missed my turn."

"Thank goodness that's the worst thing that happened while I was operating a 2-ton motorized vehicle on the public roads."


The problem as a driver was that my 'mindfulness practice' was actually making me mindless.  I like Rainbow Walk because it gives me a chance to get a bit of exercise while clearing my head and appreciating my surroundings.  While driving, it just took my attention away from the road and traffic conditions.


I tried Rainbow Drive as a passenger, which I found much more relaxing.  And I realized that the colors I need to focus on while driving aren't the green of the trees and purple of the flowers.

Now, whenever I catch my mind wandering while I'm driving, I bring it back to the red of a stop sign or tail lights, the orange of a traffic cone, or the yellow of the lines in the middle of the road.

I don't try to do this in a particular order, just silently remind myself 'red, orange, yellow' and bring my attention back to the act of driving rather than going over my to-do list, replaying a conversation I had earlier that morning... or mentally drafting a blog post about mindful driving.  (What can I say?  It's an occupational hazard.)

Red, Orange, Yellow tends to work really well for me if there’s relatively little traffic on the road, which is when my mind tends to wander.

But this isn’t the best mindful driving practice for me when there’s a lot of traffic.  In that case, it can actually be a distraction from focusing on all the other vehicles moving in various directions.

I also find it hard to do when I’m on a very rural road with no yellow line and not a lot of traffic signs.

And during peak foliage here in the northeastern U.S., there’s a danger of focusing on the red, orange, and yellow of the maple and birch trees.

So in those situations, I switch to a different mindful driving practice.


I find it really helpful to simply keep scanning my surroundings for anything that's moving or stopping in an unexpected way, out of the normal flow of traffic.

One of the best reasons to practice mindful driving is that somebody better be paying attention!

Donald Altman asked his students to share their experiences of multi-tasking while driving, and the list is both amusing and horrifying:

Frankly, walkers don't seem to be paying any more attention than drivers.  There should be a ban on texting while crossing the street.  Not to mention listening to music, talking on the phone, or even daydreaming.  OK, that would be impossible to enforce.  But you get my point, right?

It seems like every time I drive somewhere I see a different type of road-killed critter: mouse, squirrel, raccoon, skunk...


Hitting deer, in particular, is becoming more common as their population increases in many parts of the U.S.  Or, from the deer’s perspective, as the human population keeps cutting down the forests and zooming around in metal boxes.

We nearly hit an injured doe on the inside lane of the New York State Thruway.  And we saw a buck running along the sidewalk right past American University in Washington, DC.

I’ve heard there’s a similar problem with koalas in Australia.  And my goodness, who would want to run over a koala?!

Whichever mindful driving practice you choose to try, remember that the point isn't to 'meditate.' It's to stay alert to your surroundings, so you won’t hurt yourself or anyone else.

That's why I find driving such a great opportunity to practice mindfulness: it's a time when we really shouldn't be focused on doing anything else.

Activities for Exploring the Five Senses

Human Camera: a mindfulness activity to engage the senses