How Christians and Buddhists Can Teach Each Other About Mindfulness 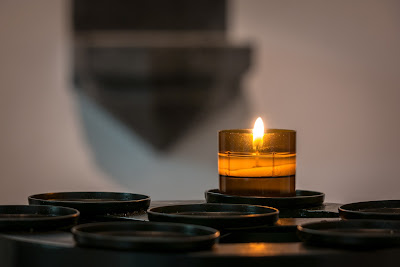 
“If Christians don’t want to meditate because they think it’s Buddhist, doesn't tea ceremony mean they have to stop drinking tea?”

That really bothered me for a few different reasons.

First of all, it's totally unacceptable to ridicule anyone's religious beliefs. That should be the bare minimum of tolerance.

Secondly, I'm tired of facile comparisons based on a superficial understanding of Buddhist theology, as well as ignorance of the actual concerns many Christians have about what is taught in mindfulness classes.


“Maybe Buddhists should stop using mindfulness bells because of all the handbell choirs at Christian churches.”

Why is there such a persistent assumption that mindfulness teachers are all Buddhist? In fact, many Buddhists are bothered by the way traditional teachings have been secularized and taken out of context. And there are many Christian mindfulness teachers, as well as teachers who happen to be Christian but are reluctant to publicly discuss their beliefs.


One teacher told me,


“I have children of all different faiths in my classes. I never mention religion, since I want my classes (and mindfulness) to be available to all. I feel the moment that I mention I am a Christian, people are wary since they are worried I will bring some religious instruction into the classes. For me, the two are different.

Also, there are some Christians who are closed to mindfulness exercises because the person who created them wasn't Christian. They will usually not be swayed by the fact that I am okay with it, and might even in some cases try to convince me that it is wrong [to teach mindfulness practices with non-Christian origins].

My opinion on the subject is that it is the same as saying I am not going to buy vegetables from a certain store because the owner is not vegetarian and I am vegetarian. It simply does not make sense to me. There is nothing wrong with the vegetables themselves!”

As I explained in an earlier post on 5 Common Misunderstandings about Christians and Mindfulness,


"Mindfulness isn't unChristian; in fact, practicing mindfulness can potentially make you a better Christian. You can bring your full attention to the Sunday sermon, or you can let your mind wander while you keep glancing at your phone. You can pray with your full mind and heart, or you can repeat phrases without really thinking about what you’re saying."

Christian writer Gari Meacham cautions against this type of "repetitive and stale" prayer, "reciting the same things over and over with no heart connection."


"My sister and I... started to recite some of the prayers we were taught to repeatedly say in our youth. I giggled as I remembered... The Act of Contrition. This is a beautifully written prayer that shares the pangs of sorrow we feel for sins we commit...

I could never understand why someone would write a prayer that starts out by saying 'Oh my God, I am hardly sorry for having offended Thee.'

[My sister] looked at me, mystified, and said, 'That's not what it says. It says, 'I'm heartily sorry for having offended Thee!'

Oops! I probably said that prayer a thousand times in my youth and never even knew what I was saying!"

Spirit Hunger: Filling Our Deep Longing to Connect with God


This reminds of the time a 10-year-old girl of our acquaintance proudly rattled off a list of the central tenets of her family's tradition. When my husband asked, "What does that mean to you?" she looked at him disdainfully and said,


"We don't have to know what it means. We just have to memorize it."

Even for adults with the best of intentions, it can be challenging to focus on the meaning when we keep hearing the same words over and over and over again.

For example, I keep hearing the same handful of parables from different Buddhist teachers. (Hey, those two monks and a beautiful lady are crossing the river yet again!)


And I've seen some of these exact same stories many times in secular mindfulness teachings. (Apparently they're monks from the secular monastery?)

Don't get me wrong. I really like the parables from both traditions. I just think it would be nice to expand the repertoire rather than repeating the same stories to the same audience.

For example, here's a passage from the traditional teachings which emphasizes maintaining a state of equanimity and lovingkindness in all circumstances:

“Over whatever you have to do, even if it be urgent and require great care, I would not have you argue or be agitated.

For rest assured, everything you do, be it great or small, is but one eighth of the problem, whereas to keep one’s state undisturbed even if thereby one should fail to accomplish the task, is the other seven-eighths.

So if you are busy at some task and wish to do it perfectly, try to accomplish it… If, however, in order to accomplish your task you would inevitably be carried away and harm yourself or another by arguing with him, you should not lose seven-eighths for the sake of one-eighth.”

Quoted in The Meditative Mind: The Varieties of Meditative Experience by Daniel Goleman


Do you agree or disagree that this advice to Buddhists could also be beneficial to Christians?

However you just answered that question, here’s the most important point to understand:

It was a trick question.

It's actually the other way around.

That quotation is from St. Abba Dorotheus, one of the early Christian hermits referred to as the Desert Fathers.


“The Desert Fathers, like present-day Indian yogis in the high Himalayas, sought out the isolation of the harshest desert to commune with God free of worldly distractions.

The meditation practices and rules for living of these earliest Christian monks bear a strong similarity to those of their Hindu and Buddhist renunciate brethren several kingdoms to the east.

While Jesus and his teachings were their inspiration, the meditative techniques they adopted for finding their God suggest either a borrowing from the East or spontaneous rediscovery.

The ways of the Desert Fathers influence Christian monasticism to this day; their selfless love remains a guiding example.” 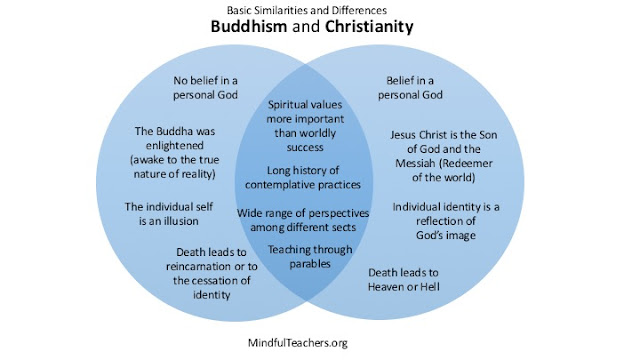 When we think we've heard it all before, it can be useful to be shaken up a bit by hearing unfamiliar perspectives from other traditions.

Personally, I've become a fan of the Sufi character Mulla Nasrudin, who does things like sprinkling crumbs to keep the tigers away.

Nasrudin is delighted when he's informed that there are no tigers anywhere near his home. Clearly, this proves the effectiveness of his tiger repellant. (Have you ever tried to convince yourself that something terrible won't happen if you can just worry hard enough?)


Here at Mindful Teachers, I'm committed to sharing as wide a range of perspectives as possible on what it means to be mindful and compassionate. For example:
I invite you to explore some new perspectives, and perhaps see your own tradition with fresh eyes.

However, in drawing comparisons and encouraging a reflection on the potential value of unfamiliar teachings, I don't want to perpetuate the misunderstanding that ‘all religions are the same’ or ‘it doesn't matter what you believe’ (both of which can be offensive to people whose faith is central to their lives).

Thich Nhat Hanh is a revered Buddhist teacher whose mindfulness practices are used by many Christians. In Going Home: Jesus and Buddha as Brothers, he explains:

But when you look deeply into the mango and into the orange, you see that although they are different they are both fruits.”

Or you might prefer this way of thinking about it: in Secular Meditation, Rick Heller describes many of the popular mindfulness practices as “rummaging through the Buddhist closet for things that fit.”

I love that image, but I think we should be rummaging through the closets of other traditions as well. Some of what we find may require alterations, and some of it won't suit us at all. But we might be pleasantly surprised to find an accessory that coordinates with, and gives new life to, our favorite ensemble. And we can open our own closets to our neighbors and welcome them to share in our bounty. There's more than enough to go around.

photo of votive candle from Didgeman on Pixabay

The Eightfold Path in Everyday Life