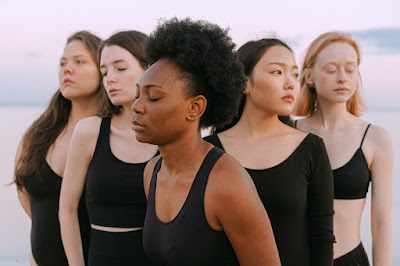 Photo by Anna Shvets from Pexels

While volunteering at a juvenile detention facility, Mark Salzman asked some of the youth if they'd ever attended the meditation classes.

Most of them had no interest. Those that were interested had given up after the first session.

One of the young men explained:

'You suppos'ta close your eyes and picture yourself goin' down some stairs into your workshop in the cellar where you got all yo' tools... 'tools for life.'

(from True Notebooks: A Writer's Year at Juvenile Hall)


Pamela Hays' ADDRESSING framework is a useful acronym to remind us of the variety of factors that make up our cultural identities:


*I've started thinking of the two D's as Deafness and/or Disability, since members of the Deaf community (which does not represent all deaf individuals) don't consider themselves disabled.]


It's quite useful for all of us to consider:


Dr. Dena Simmons of the Yale Center for Emotional Intelligence grew up in a dangerous neighborhood, living with her three sisters and her mom in a one-bedroom apartment. She explains how her background has influenced her approach to mindfulness:


"When I was a child, being mindful was a matter of safety. I went to sleep, often, to the sound of gunshots. So being mindful –mindful of my body and its safety—was what kept me alive. [...]

Another piece of mindfulness for me [is] understanding that every single day I have the privilege of waking up without pain. My sister does not. I pray every day, asking for her not to suffer. Sometimes the privilege we forget about is our ability to not feel pain in our body."

(from 'Finding Your Way Back Home,' Mindful Magazine)


Dr. Simmons is one of the Black American women who've been opening up the fields of mindfulness and social-emotional learning to a broader range of perspectives.

As Jenée Johnson points out:

"Black people have been practicing mindfulness forever... Think about the young people who integrated the lunch counters and trained themselves to maintain their composure. They sat at the counters while people poured food and drinks over them and they maintained their equanimity."

(from 'Encouraging Meaningful Conversations about Race and Trauma', Mindful Magazine)

Most of teachers I've met personally are very good at working with people from a wide range of backgrounds. However, in the field as a whole there's a lot of room for improvement.


In an interview on Disrupting Systemic Whiteness in the Mindfulness Movement, Dr. Angela Black explains,


"There is an overt assumption that the content presented is universally beneficial to EVERYbody...

And all of this universality is assumed while never having to say that decades of evidence-based, well-funded, highly visible, and industry standard findings that support mindfulness curricula and practices are predominantly normed on the lived experiences of White people.


Many Paths to Mindfulness


In the midst of the protests for social justice, an important message has been emerging: Mindfulness classes and meditation centers are not always as welcoming as they think they are.


"This class/retreat/type of meditation is suitable for everyone."


"Our program is designed for university-educated politically-liberal White agnostics between 35 and 55. You'll feel much more at home here if you have a strong interest in Buddhism and no history of trauma."

Fortunately, this is starting to change, with the increased awareness of the long history of contemplative practices in all of the major religious traditions.

There are also many indigenous traditions connected to mindfulness.  According to Michael Yellow Bird, MSW, PhD:


"Indigenous and Tribal Peoples have a long and important history of engaging in contemplative and mindfulness practices in daily and ceremonial life.  However, during different periods of European and American colonization many of the sacred and secular practices were deliberately destroyed, leaving many communities without the cultural approaches they had used for millennia to heal and restore well being."


Indigenous mindfulness teachers like Dr. Yellow Bird are working to integrate contemporary practices with reawakened traditions. In Australia, there's a new Indigenous meditation app "scripted and recorded by senior Anangu women in the languages of Ngaanyatjarra and Pitjantjatjara." And Mindfulness Education Group in New Zealand offers A Maori Perspective:


"For Māori, mindfulness practices for healing and wellbeing enhance the connection to Te Ao Wairua (the spiritual world) and Te Ao Turoa (the natural world)... Maori cultural practices that support mindfulness include manaakitanga (respect, generosity and care for others); aroha (love, compassion and deep affection); kaitiakitanga (look after, care for and protect) and karakia (recite blessings, forgiveness and compassion.)"


In considering different approaches to mindfulness, we should also keep in mind that many people of color are people of faith. For example, "Roughly eight-in-ten (79%) African Americans self-identify as Christian... three-quarters of black Americans say religion is very important in their lives."(source: '5 Facts About the Religious Lives of African Americans')

In a study by Dr. Angela Black and Dr. Natalie Watson-Singleton on a mindfulness-based intervention for African American women,


[Study participants] mentioned that people may not engage in these interventions due to beliefs that these approaches oppose traditional religious practices, mainly Christian practices. For instance, one participant, Deanna, described sharing her intervention experience with a church member, in which the member replied “Meditation? Isn't that the stuff that the Buddhist people do?” According to Deanna, and other participants, individuals may decline participating in MBIs for fear of going against their religious affiliation. [...]

Conclusion: The Power of 'Beginner's Mind'

If we think about the components of most mindfulness programs:

All of these can be done in a variety of ways. Since none of us can be an expert on every possible tradition, it's wisest to approach with "beginner's mind": open, curious attention rather than assuming we already have all the answers.

"By ensuring we’re attuned to the social identities someone carries—and considering how those identities might interact with ours—we can adjust our interventions to try to effectively meet the needs of the person we’re working with... This includes the ability to be humble in face of what we do not know. Rather than try to be perfect and know everything, we can practice building a genuine curiosity about other people, other cultures, and social conditions... adding depth to our work."

There are a plethora of posts here at Mindful Teachers about ADDRESSING diversity, including: